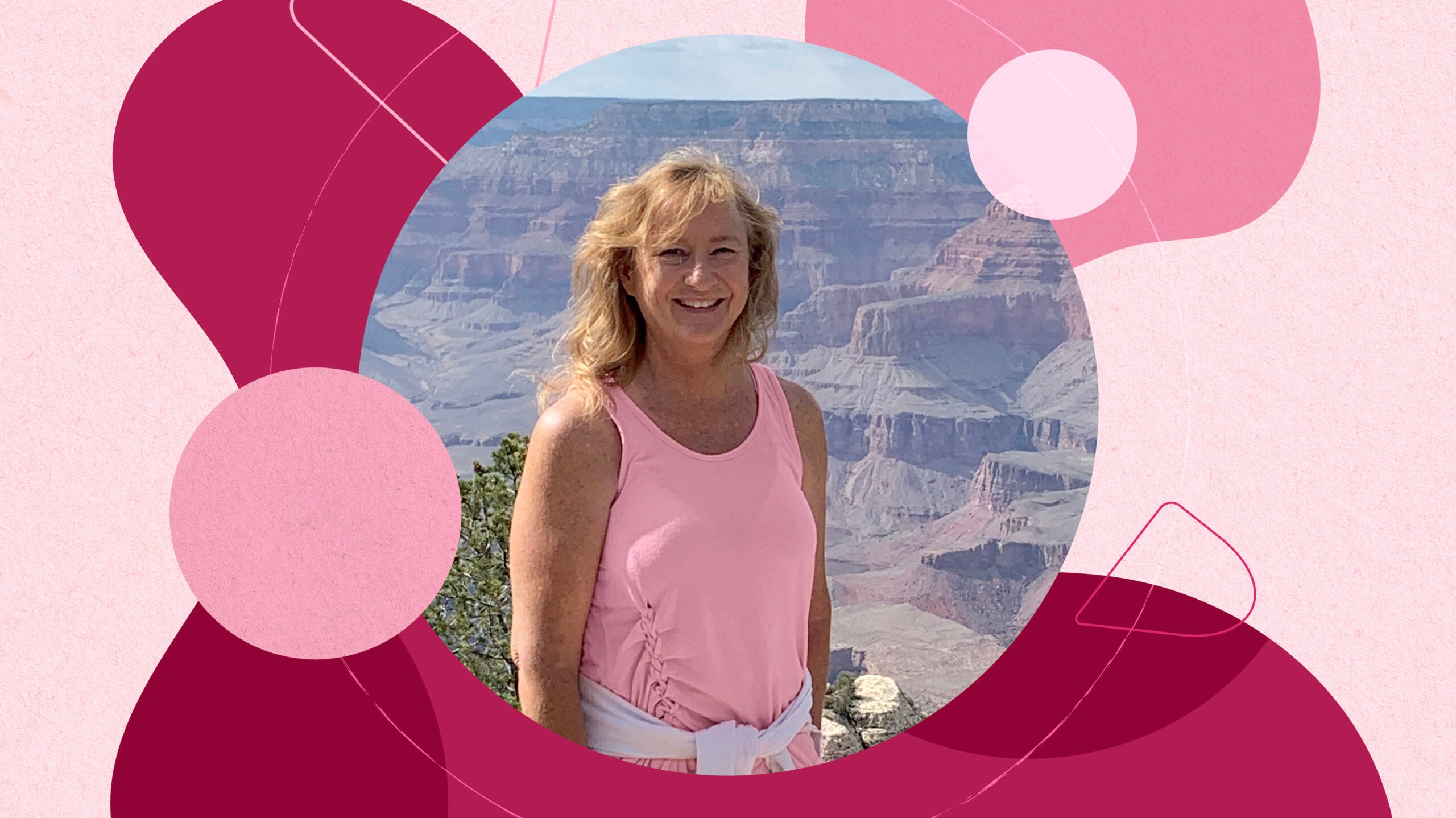 Why I Advocate spotlights members of the breast cancer community working to make the world a more welcoming, equitable, and accessible place. Whether it’s calling for policy change, highlighting the need for representation, or simply offering the support they wish they had, these advocates are proof that we are stronger together.

In 2011, Jackie Scheuerman went in for her yearly gynecologist appointment, expecting it to be a run-of-the-mill checkup. During her exam, her doctor felt a divot in her breast.

While not appearing overly concerned, the doctor told Jackie it was still worth checking out, so she sent her for a mammogram that same day.

Jackie hadn’t expected to get a mammogram. She went and got it, then went home, not expecting to hear from her doctor again that day.

“She called me about 3 hours later and told me to get back to her office,” Jackie remembers. “It was scary. I held my breath for about 2 hours until I could get back there.”

As soon as her husband got home, the pair went back to the doctor’s office and that’s where she got the news: She had breast cancer.

The cancer lump was small — under a centimeter in size — but it was in a tricky spot on the outside of her breast, almost under her arm. She would need to get some biopsies right away so that she could get treatment as soon as possible.

“I knew zero about breast cancer,” Jackie says. “Nobody in my family has had cancer; nobody has been through it.”

The biopsy was scheduled within a week, but the hardest part was waiting another week for the results.

“I am a high anxiety kind of person, and I did not handle it well,” Jackie remembers. “I was a nervous wreck. I worried 24 hours a day. I didn’t sleep at all. I felt awful. I couldn’t connect with my family. I didn’t handle it well at all.”

What got her through all the waiting — and later the treatment for hormone receptor-positive, HER2-negative breast cancer — was her work, she says. She was an elementary school librarian, and being around the kids and doing a job she loved helped her cope with her fear and anxiety.

“Working with little kids, all you can do is giggle at them,” she says with a laugh. “They’re so funny. So that’s where I needed to be. I worked every day I possibly could.”

Her treatment for the cancer was long and painful, involving 39 different surgeries over 9 years, starting with a double mastectomy.

“I went ahead and opted for a double mastectomy because I did not ever want to do this again,” she says. “I went through hell and back for treatment. My body is very, very susceptible to medications, so I had a lot of trouble through the surgery process.”

By 2013, Jackie had healed from her reconstruction surgeries and was officially in remission.

But one morning in 2015, while she was putting lotion on, she felt a pebble-size lump in her chest.

“I knew immediately,” she says. Her cancer was back.

The second time around, her treatment involved radiation treatment, which put her body through hell.

“I was actually burned all the way through my body,” she says. “Even, like, my rib cage was burned and all of the muscle tissue and soft tissues, and everything was burned from the inside out. I spent about 9 months fighting infection after infection.”

Unable to figure out what was going on, Jackie flew from Colorado to see a specialist at Memorial Sloan Kettering Cancer Center in Manhattan. There, the specialist determined what was wrong, treated the infection, and rebuilt her chest using tissue, muscle, and blood vessels from her thighs.

“They literally saved my life,” she says. “My doctor said when he got in there the first time and took out the implants, there were already huge pockets of infection. I would never have healed, and at some point, the infection would have gotten me.”

Today, Jackie is in remission again.

“I’m healthier than I’ve ever been,” she says confidently.

So now, she’s helping others get through their diagnoses.

Being a support system for others

After going through breast cancer twice, and the pain that came with radiation treatment and recovery, Jackie joined Bezzy BC, a peer-support online community for people in many different stages of the breast cancer journey.

“My friends, my family were all there, but none of them had been through it; none of them knew how it felt, or what I was going through on a personal level,” Jackie says. “If I would have had more of the contact or had more questions answered by somebody who’s been through the process, it would have been a lot easier.”

“It was a lonely experience. It was kind of isolating,” she adds.

She wanted to find a group of people that understood what she had been through, and that’s exactly what BC Healthline did for her.

“It was really cathartic for me to hear about other women going through the same things that I was going through,” she says. “To be able to listen to them and hear what they were saying and how this was affecting their families and their lives.”

She knew how much this community meant to her, and she wanted to give back. So, when she was asked to be an ambassador, she knew, deep down, that she had to do it.

“If I could change one woman’s life and make her not go through some of the crap that I went through, that would make it worthwhile,” she says. “If somebody didn’t have to worry or didn’t have to suffer. That’s why I wanted to do this.”

“We do anything we can to help anybody get through this experience,” she adds.

As an ambassador, Jackie hopes that she can help others learn to speak up for themselves, especially when it comes to talking with their doctors.

This was a lesson she learned firsthand, she says, when she first got her diagnosis. The first oncologist she visited made her wait 45 minutes in the waiting room and then another 45 minutes before seeing her. Then, when he finally saw her, she says, he gave her a generic speech about breast cancer, immediately declared they’d do chemotherapy, and dismissed her fears.

In shock, though, and still reeling from her diagnosis, Jackie didn’t feel like she could question what he said.

And because they said no to that first doctor, they went on and found a doctor who Jackie trusted implicitly — and one who got Jackie through even her lowest points.

“It’s OK to take a step back, to take a breath, and it’s OK to ask questions,” she adds.

She’s determined to make sure everyone facing breast cancer knows that going in.

Simone Marie is a journalist who writes about health, science, and parenting. Outside of work, she’s usually camping or hiking in a national park with her husband, toddler, and rescue beagle. Check out her website for more.