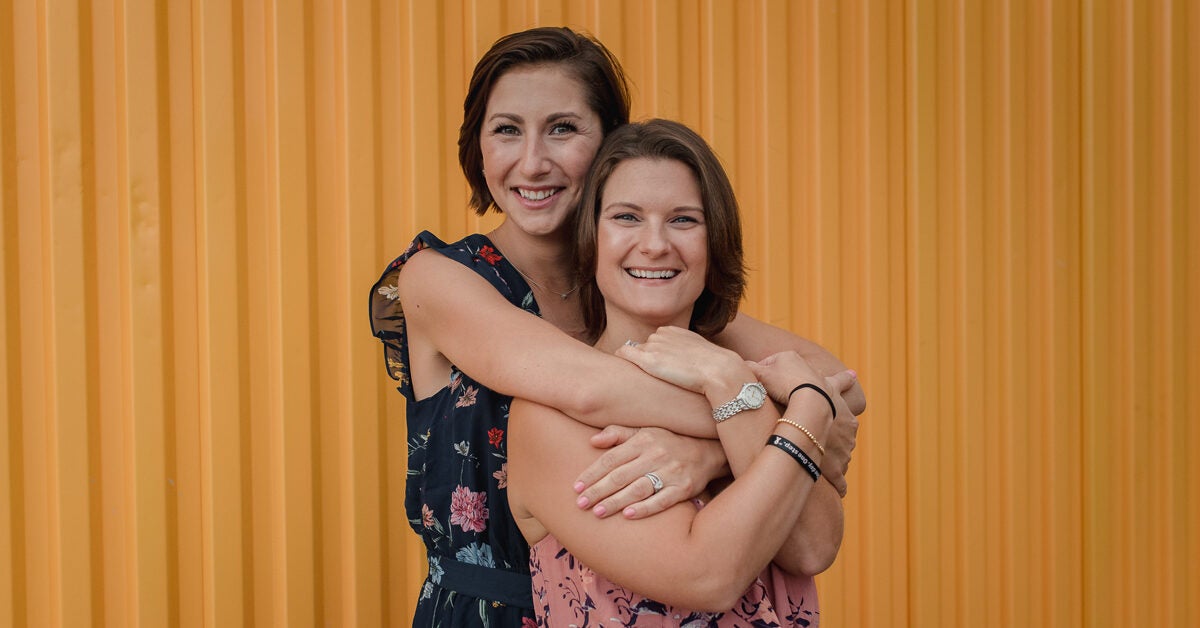 In September 2018, a few days after learning she had stage 2 hormone receptor-positive breast cancer, Bridget DeSimone felt the need to connect with others going through the same thing.

“I was crazed and didn’t know what to do. While browsing Instagram, I started following other women who had cancer,” says DeSimone.

She came across a survivor discussing how the Bezzy BC (formerly BC Healthline) breast cancer support app helped her, and she decided to download it.

After navigating the app for about a month, DeSimone began using its matching feature, which connects users with others based on their treatment, stage of cancer, and personal interests.

“I saw Nicole pop up as a possible match. She was in her late 20s — only a year older than me — and I could see that she lived close, about 30 minutes away on Long Island,” DeSimone recalls. “I connected with her and we ended up messaging way past midnight getting to know each other.”

The connection was perfect timing for Nicole Seaman, who was diagnosed with stage 2 triple-negative breast cancer just 3 months before DeSimone.

“I was only on the app for about 3 days when Bridget matched with me. I forget it’s how we met because she feels like she’s been my friend since I was 5,” says Seaman. “I was halfway through treatment when I met her, but I feel like she was always there.”

After 4 months of building their friendship via the Bezzy BC app, Seaman invited DeSimone to celebrate the end of her treatment and 29th birthday with her.

“It was very exciting to finally meet in person because we couldn’t do it earlier since it was winter and we both were in active treatment,” DeSimone says.

From that night on, their relationship grew stronger.

Over their nearly 2-year friendship, both women have undergone bilateral mastectomies, 6 months of intensive chemotherapy, and for DeSimone, 28 rounds of radiation.

“During surgery recoveries and chemotherapy we would check in on each other daily,” says DeSimone. “We are there for each other, giving each other courage at our times of fear and worry, in a way that no one else can understand. We are each other’s cheerleaders.”

Throughout their friendship, they learned how similar their interests are and how alike their views are on everything from politics to music to a love of bargain shopping.

“Take cancer away, if we had met in any other circumstance, we still would have been best friends. It’s insane how much we relate,” says DeSimone.

The New Yorkers have lots of fun together doing many things the best of girlfriends do, including strawberry picking, shopping, dinners out, wine tasting, beach days, going to concerts, and sleepovers.

“Not only does Bridget know when all my doctor’s appointments are, but she even helped me pick out my fridge the other day. There’s nothing I don’t rely on her for. She’s my person,” says Seaman.

It’s nice having someone who understands

Seaman and DeSimone bond over being working mothers of toddlers, as well as wives. Their children are a year and a half apart.

“We bounce ideas off each other about the kids. There are certain fears and concerns of being young moms and breast cancer survivors that others just can’t understand,” says DeSimone.

The same goes for their marriages.

“It’s more complicated than other 20-something relationships. We don’t feel ourselves and don’t look how we thought we would at this age. Going through surgery and recovery and working through all of that in your relationship is hard. It’s nice to have Nicole who truly gets it,” says DeSimone.

Having a sounding board is invaluable to Seaman.

“Bridget knows everything about me; any gross thing you can imagine that a cancer patient would go through pre-, post-, or during treatment. I can tell her things I don’t want to say to my husband because they may make me feel less attractive,” she says.

While having cancer isn’t something the friends wish for themselves or each other, they both say the best thing that came from their diagnoses is their friendship.

“There’s always a silver lining, and I thank God for cancer because it brought us together,” Seaman says.

Even though the bond they share started as one based on cancer, DeSimone says it blossomed into much more.

“While I wish cancer wasn’t the reason we became friends, I am more than grateful that we are. I would not be the champion I am today without Nicole’s help and constant love and support,” she says. “The two of us are so thankful for the positive power of the internet and [Bezzy BC] for connecting us to be lifelong friends.”

Cathy Cassata is a freelance writer who specializes in stories about health, mental health, medical news, and inspirational people. She writes with empathy and accuracy and has a knack for connecting with readers in an insightful and engaging way. Cathy contributes regularly to Healthline and Verywell, and she has also been published in HuffPost. Read more of her work here, and connect with her on Twitter, Instagram, Facebook, and LinkedIn.