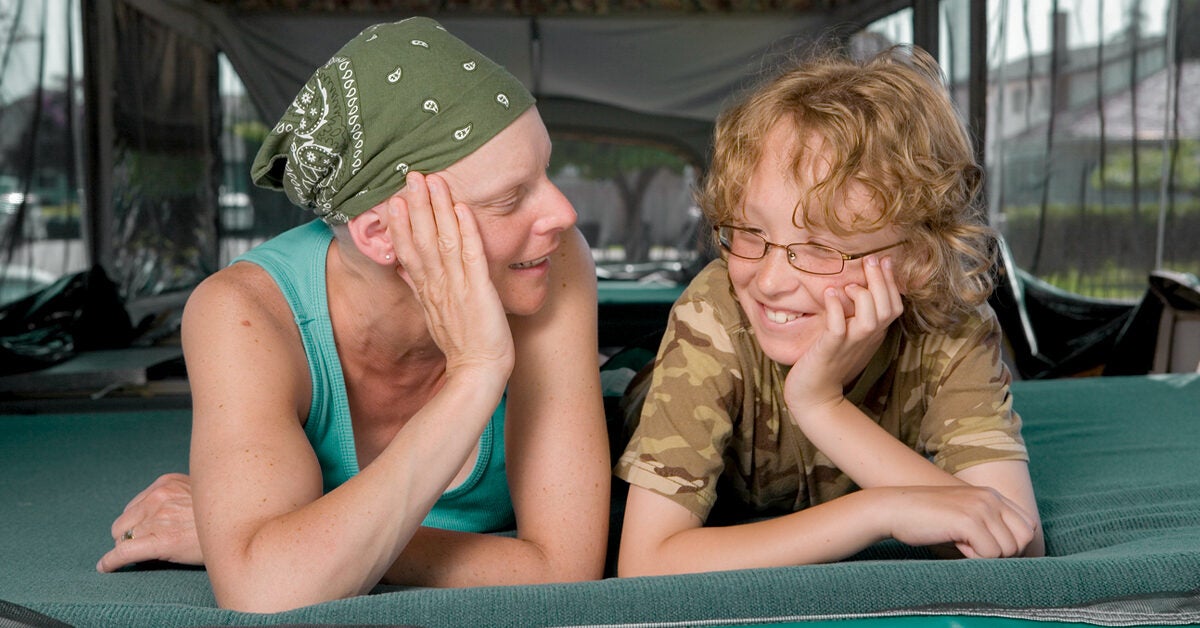 No one enjoys difficult conversations, but being honest with your child about your diagnosis can make a big difference.

When I was diagnosed with breast cancer, my son Christian had just turned 5.

While I was leaning over him to tuck him into bed shortly after my diagnosis, he pointed to the large bandage sticking out of my tank top from a biopsy a couple of days prior. I was barely processing my diagnosis myself and hadn’t even begun to think about how to tell him anything.

He’s an observant and intelligent child, and his father and I knew he needed to be told something.

We were so uncertain in those first days of what was ahead of us, but we knew we were going to be going through a lot. I never wanted Christian to be blindsided by anything.

I didn’t know where to start or what to say, so I just dove in.

Use simple language they can understand

At age 5, Christian understood the concept of germs, thanks to a handwashing song he learned from a kids show.

I explained to him that I had a germ called cancer growing inside my breast and making me sick. I told him that my doctor was going to help me try to get rid of the germ with surgery and medicine.

He understood that, and it was enough.

Telling him early on defined communication going forward. As things progressed to a mastectomy, chemo, and radiation, I explained things just enough for him to understand.

Before my mastectomy, I told him that, since the cancer germ lived in my breast, I was going to the hospital to have my breast removed so it couldn’t spread to other parts of my body.

When I started losing my hair to chemo, I simply told him that I was taking a medicine called chemo that destroys the cancer germs in my body, but that it was making my hair fall out. I reassured him it would grow back. He understood the reasons for bandages, surgeries, and disappearing hair just enough.

Now that my son is 11, he understands more. Over the years, he has seen me go through breast reconstruction surgeries, all explained in the most basic ways.

Since my cancer was hormone receptor positive, fueled by estrogen, I take a hormone therapy pill every day to suppress estrogen in my body. He understands that this pill will help decrease the chances of cancer returning. He also understands that sometimes that pill makes my body ache or makes me tired so that I need to rest.

Let them feel, let them cry

When Christian was 9 and I was a few years out from cancer with my hair grown back and my chest reconstructed, a commercial for a breast cancer drug came on TV, triggering him seemingly out of nowhere.

He was so much bigger now than when I was first diagnosed, but crawled onto my lap like a much younger child. He had never really cried about my cancer before. He had been too young to really “get it.” But now he wasn’t.

I consoled him and just let him feel all he was feeling and validated him. It was my job to comfort and commiserate with him and to give him ease, no matter what, as he expressed those feelings.

We talked about why the commercial upset him and how he was afraid I would get cancer again. I was honest with him and told him anything could happen to any of us at any time. However, we wouldn’t let fear or worry spoil our life in the moment. We are alive today, and here in this time and space, right now, we are together and we are OK.

Be prepared to talk about death

Since Christian is older now, he fully understands that people can die from cancer.

In keeping with my desire for him to never be blindsided, I again told him the truth, this time about the possibility of recurrence in the future. Yes, there’s a chance my cancer could come back, it could be terminal, and I could die.

I also reminded him about the surgeries, chemo, and radiation I had when he was much younger and how they enabled me to still be here today. I told him if the cancer did come back, we would worry about it then.

Since he’s older now, I also told him that if I found out tomorrow that my cancer had come back and was terminal, that I wouldn’t die the next day. I explained to him it would take time.

This conversation led to: “What happens when we die? Are ghosts real?” Just be ready to share your beliefs or own questions about death honestly.

I felt some relief in my son being old enough to understand that now. For us, talking about death actually turned into a funny conversation about ghosts and the ways I would haunt him if I were a ghost. I assured him I would never, ever scare him.

Recognize when your kid has ‘cancer talk’ fatigue

I imagine that in the future, Christian will have more questions about breast cancer.

I’ll explain to him what living with stage IV metastatic breast cancer (MBC) looks like from my observations of my friends in the MBC community.

Right now, I don’t think he needs more information than what I’ve given him. Frankly, I think he is tired of anything cancer-related. I now make a point of not talking about cancer around him at all.

Always be real, but remain hopeful and centered on how the cancer will be treated.

Explain what the goal of the treatment is (i.e. to prevent a recurrence, to relieve pain, or to delay progression to add time to your life).

Remind your kids that they can always ask questions, but that you might not now know the answers.

I think it’s important to remain calm and as open you deem appropriate. You may not want to tell your child all the details about your cancer, and that’s OK. Use your judgment about what to share based on your child’s age.

From my experience, I think one of the best things you can do when talking about cancer with your kids is to just reassure them that no matter what, you love them. No matter what, you’ll try to stick to the usual routines of life as much as possible.

Sometimes, there just isn’t anything more we can talk to our kids with about cancer.

I am a big believer that touch soothes and reassures children in ways words often can’t.

Sometimes, you need to not talk about it and give them all the hugs, kisses, and cuddles you can — and then give some more.

Article originally appeared on May 12, 2021 on Bezzy’s sister site, Healthline. Last medically reviewed on May 13, 2021.

Monica was born and raised in the San Francisco Bay Area where she is raising her son. She loves staying connected to the breast cancer community through her work as the community guide for Bezzy BC, and as production assistant with Wildfire Magazine. After her cancer diagnosis, she has a passion for volunteering, and serves on the board of directors with her local support group, Bay Area Young Survivors. Monica loves creative expression through writing and art. She has shown her breast cancer advocacy exhibit “Reconstructed: A Breast Cancer Documentation Project” with El Comalito Collective in Vallejo, California several times over the years. You can connect with her on Instagram.