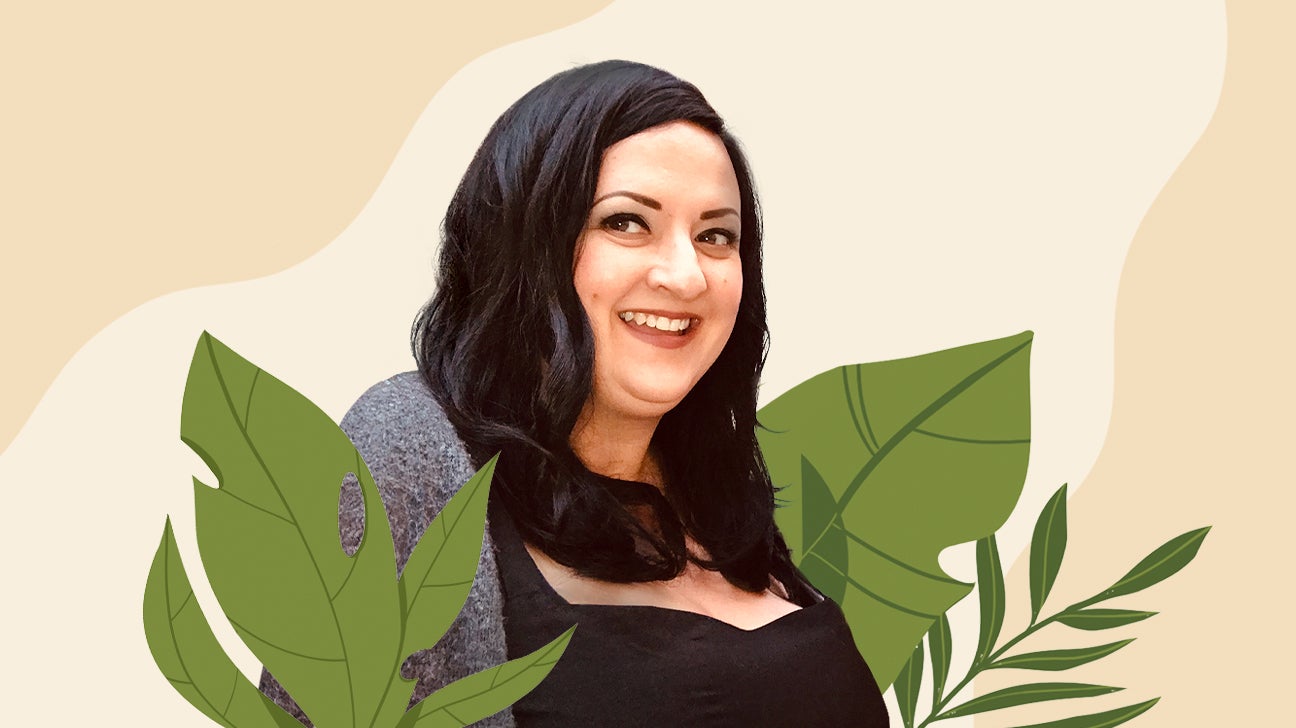 “What, radiation, me?! I have to do THAT? Is pain involved?”

This was the commentary in my head when my oncologist told me radiation would be part of my breast cancer treatment plan. Moreover, I’d be doing 28 sessions of deep inspiration breath hold radiation, which I had definitely never heard of.

In my role as community guide in the Bezzy BC community, we talk about all the breast cancer things.

Community members commonly ask what to expect going through radiation (rads for short). And some have asked how my body is now, 5 years after treatment. Is there scarring? What about tattoo marks? Any lingering things?

My 6-year cancerversary from date of diagnosis is approaching, and I realize I can share my rads experience from beginning to the present.

After finishing dose-dense AC-T chemo, I had several weeks to recover before starting rads.

The cancer had been on the left side of my chest, and I needed to be radiated in areas close to my heart.

This is where the breath hold radiation comes in.

This type of rads is when the patient takes a deep breath and holds their breath while radiation is being delivered. Filling the lungs with air causes the heart to move away from the chest in order to protect it from radiation.

That sounded scary to me — but not as scary as the information my oncologist gave me relevant to my chances of recurrence if I didn’t do radiation.

I was stage 3C invasive lobular carcinoma that spread to 14 lymph nodes. Like chemotherapy, radiation wasn’t an option — it was a must.

So off I went to a planning appointment with my radiology technician team and dosimetrist. I’d never heard of a medical dosimetrist before that, but part of their job is to determine where exactly the radiation beams need to be delivered for treatment. (They are very, very smart.)

Planning consisted of removing my clothing above the waist and lying face up under the radiation machine, on a table layered with a plain white sheet, topped with a layer of a foam-like material. My body was positioned just so, lined up with lasers and the CT machine.

The foam under me was custom molded to my shape to stabilize my body into an exact position.

I had my cancer-side arm over my head so my armpit — where cancerous nodes were found — could be treated, as well as to allow my chest area to be wide open.

I was positioned centimeter-by-centimeter by the rad techs pulling the sheet under the foam holder just so. I had a clip to hold my nose closed, and a snorkel-like apparatus placed in my mouth.

After I filled my lungs with air and pushed my breath to the snorkel, there was a stopper in it that would stop my breath from expelling, thus keeping my chest inflated. I had to be perfectly still. This process took about an hour and a half.

Once positioning was dialed in, I was marked with a pen and taken to another room to get tattooed on my chest. These tattoos are very important and would be used to align my body under the radiation machine correctly each day.

I was tattooed old school “stick and poke” style! A sterile needle was dipped in black ink, and then I was poked in three places on my chest. It was quick and painless.

Over the next 28 days, I was radiated at the cancer center.

I was issued a key fob to check into a group dressing/waiting room each morning, where I’d find the neatly-printed label in sans serif font that spelled out my name on a locker. The medical gown I changed into was kept there, and I could lock up my belongings, too.

Next, I’d wait in a sitting area adjacent to the “radiation chamber,” as I called it, which was a room made of thick concrete walls where the radiation machine lived.

Once inside, I removed my gown and lay on the table in my custom foam body holder with the sheet under it. The technicians would tug the sheet this way and that until my tattoos were lined up with lasers in the correct position.

Then, they’d leave the room and the dosimetrist would speak to me over an intercom and instruct me when to breath and hold my breath a few times while I was beamed in my armpit, chest, and a cluster of lymph nodes by my clavicle.

I didn’t fry like bacon on the table as my imagination had me believe I would. The actual delivery of radiation took less than 15 minutes. A few times, it took the technician longer to position me correctly than the actual treatment.

The technicians called the radiation machine Wilson. Each day I entered Wilson’s chamber I’d ask him “wassup?,” thank him for his service, or chide him if he was giving the techs problems.

Anthropomorphizing the machine and bantering with the techs about Wilson brought levity to my heavy reality.

I worked through radiation, and by week 3 I was exhausted. I left work early a few times to nap.

My skin was holding up fine and I was applying a thin layer of plain white lotion on my radiation spots. Honestly, I wasn’t consistent with lotion and skipped days.

One of my chemo nurses told me the easiest thing I could have control over throughout active treatment was to stay well hydrated. I did, and I believe that helped my skin — or at least I thought it did.

My skin slowly burned as the weeks passed. By the last week, it was like a bad sunburn.

The space where my armpit and side of my chest meet was irritated from the rubbing of my normal arm movements. The area was hot, and cold packs felt nice by day’s end.

My radiologist had told me radiation has a cumulative effect at the cellular level over time, and radiation kept doing its thing in the weeks after active treatment.

My skin became more bothered the first week after rads ended. I spent a couple of days in bed, shirtless, letting my skin breath and avoiding irritation of clothing.

I slept a lot. I was exhausted and hurting. I took pain medication.

I also used silver sulfadiazine medicated cream prescribed to me. It soothed and healed my burned skin fast.

Then, the peeling of the skin began — and was over as quickly as it started.

As the months passed that first year following radiation, I used various oils (I liked rosehip and argan oil) to keep my skin supple and to hopefully reduce scarring.

My chest was shrunken and very tight on the outside, and things felt tight inside too. My armpit and clavicle seemed fine.

I had a prominent “tan line” on my chest that wrapped around my side, and a big red spot on my clavicle.

Things in my chest felt weird inside, like a tight pulling sensation. My breast implant on my rads side began to push up toward my clavicle and armpit.

It was uncomfortable, and my implant reconstruction wasn’t looking so great with all the hard and shriveled radiated skin.

I decided to explant the implants and had a DIEP flap reconstruction. My plastic surgeon was able to remove some of the external and internal radiated tissue and replace it with skin and fat from my belly.

Things felt and looked a lot better on my chest after that.

Right after radiation, my armpit didn’t sweat and my armpit hair hardly grew.

Around year 3, my armpit would sweat sometimes, and the hair began to grow back.

I was beginning to notice a tightness and dull pain in my rib cage, my upper back, and shoulder area. I was worried about recurrence.

I had things checked out and learned this was caused by internal scarring of radiated tissue. I was OK.

My armpit still doesn’t sweat as much, and while the hair does grow, it does at a slower pace than the non-radiated side.

As for my tattoo marks, I really have to look for them. They’re smaller than my regular moles and I think one got cut out during my DIEP flap recon.

The radiated skin around my clavicle is fussy. It’s a faint red spot, but likes to act up when I’m hot, tired, or stressed. I’m not a person who blushes, but I feel like that spot acts like it’s blushing. I cover it with my daily facial sunblock and keep it well moisturized as part of my nightly skin care routine.

Over the years, the tightness in my back, shoulder, and ribs has become more pronounced. It doesn’t exactly hurt, but I’m always aware of it. It’s nothing terrible and certainly doesn’t affect my activities of daily living.

The tightness is very sensitive to my energy levels. If I’m tired, hungry, stressed, in the same position too long, or even laughing really hard for a long time, it lets me know it’s there.

I was at a small gathering of survivors last year and you knew who’d had radiation because they were raising their arms to stretch out that radiation tightness.

I raise my arm often throughout the day to stretch it. I’ve had some good, hearty belly laughs, and my internal radiation spots do get tight sometimes when I laugh like that. When I’m staying physically active, these things are less noticeable.

I’m glad I had radiation to increase my overall survival. The long-term issues are there, but not really a bother.

I still have my little tub of silver sulfadiazine cream that I use on random cooking or curling iron burns — I know my fellow radiated friends can relate!

Monica was born and raised in the San Francisco Bay Area where she is raising her son. She loves staying connected to the breast cancer community through her work as the community guide for Bezzy BC, and as production assistant with Wildfire Magazine. After her cancer diagnosis, she has a passion for volunteering, and serves on the board of directors with her local support group, Bay Area Young Survivors. Monica loves creative expression through writing and art. She has shown her breast cancer advocacy exhibit “Reconstructed: A Breast Cancer Documentation Project” with El Comalito Collective in Vallejo, California several times over the years. You can connect with her on Instagram.